WHAT IS A VARIABLE SPEED DRIVE (VSD)

A VSD is a device that is used to control the speed of an induction motor. An AC induction motor is a constant-speed motor. In many motor applications, energy use can be reduced considerably if the speed of the motor varies in response to the changing process conditions. A VSD makes this possible.

In applications where motors are used to drive pumps, fans and compressors, the mechanical power needed is proportional to the cube of the fluid flow. Thus, for instance, reducing the flow from 100% to 80% of the nominal value would halve the mechanical power required.

Where fluid flow is controlled by dampers or valves, much of this potential for energy saving is lost. The application of a VSD, on the other hand, enables the motor to respond to the changing flow requirement, and therefore directly translates this potential into electricity savings.

HOW DOES A VSD WORK?

A VSD converts the 50Hz fixed-frequency and fixed-voltage AC power supply into a DC supply, using an integrated rectifier. Integrated power electronics then convert the DC supply into a sinusoidal output with continuously variable frequency and voltage, which is used to drive the motor. In other words, a fixed sinewave in is converted into a variable sinewave out.

This variable output enables the VSD to quickly change the speed and the torque of the motor in response to the changing load. The required variation in output is controlled by onboard microprocessors. Modern VSDs have no moving parts and are therefore highly reliable and efficient.

A VSD typically has an operator interface that enables manual operation of the drive and the configuration of parameters to match the VSD to the motor and to the application.

EXAMPLE OF A VSD PAYBACK CALCULATION

Consider an 11kW 2-pole EFF1 motor driving a product transfer fan for a milk powder processing plant. The fan motor operates 6,000 hours per annum. Air flow is controlled via a manual damper set to 80% open. The motor efficiency is 90.5%.

From the curve representing the system in Figure 2 below, we see how the damper setting reduces the input power requirement by a factor of about 0.9. A cost of electricity of €0.14 per kWh is assumed.

The annual cost of running the motor without VSD is as follows: 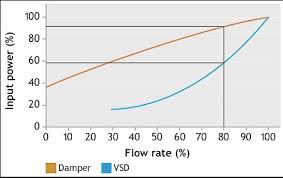 If the damper is replaced with a VSD, the curve in Figure 2 shows that the input power is now reduced to 58% of maximum when running at 80% of full load. If we assume that the combined efficiency of the motor and the VSD is now 86%, then the annual running cost of the motor combined with VSD can be calculated as follows:

Thus the annual cost savings achieved by replacing the damper with the VSD are as follows:

If we assume a cost of €6,000 to supply and install the VSD, taking support from the ACA scheme into account, this gives us the following payback period:

In this simplified example, a payback of two years has been calculated. The load profile has been simplified to a constant 80% of full load. In practice, a more detailed examination of a varying load profile would be needed to calculate the true annual running costs.

( helping you to acheive  real  savings)